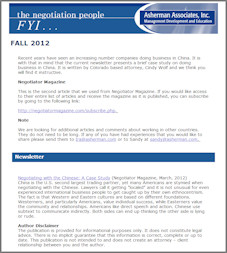 If you haven't subscribed to our email list, or if your email address has changed since you signed up originally, please use our
Subscription Form
to receive our new quarterly update, FYI.

Summer 2016: After the Ink Dries...Fulfilling the Promises
by By John Baker (Negotiator Magazine, Sep, 2014)

Summer 2015: Prepare a Negotiation not a Presentation
by Steve Altman (Negotiator Magazine, Aug, 2014)

February 2013: The Most Serious Errors Made by Negotiators: Twenty-Five to Consider
by James L. Greenstone, Ed.D., J.D., DABECI
(Negotiator Magazine, May, 2006)

January 2012: The Art of Face-to-Face Networking In a Digital Age [PDF]

June 2011: Overconfident, Underprepared: Why You May Not Be Ready To Negotiate [PDF]

November 2010: How to Defuse Threats at the Bargaining Table [PDF]

January 2010: Make the Most of e-Mail Negotiations [PDF]

August 2009: Culture And Its Impact On The Bargaining Table Part Two [PDF]

Utilizing What You Have Learned [webpage]

Beyond the Obvious: Culture and Management Issues in Northern Europe, Part 1 [webpage]

Beyond the Obvious: Culture and Management Issues in Northern Europe, Part 2 [webpage]

Negotiating with the Japanese [webpage]